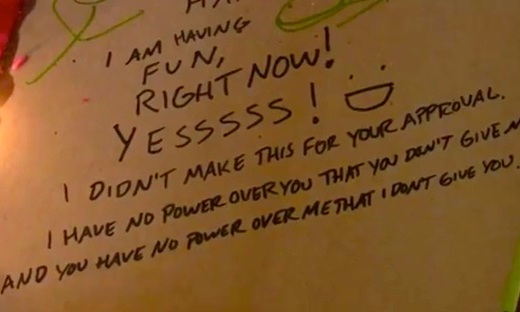 Mathemusician Vi Hart dishes advice on how to deal with negative comments. While her presentation is geared towards YouTubers, much of her recommendations can be taken to heart by creators like you and me.

For a recovering stress-o-holic like me, this is really something that should be kept in mind.

I write this not only to fulfill the challenge but also as a reminder for myself. I know for a fact that even though I say I have learned my lesson already, sooner or later I would regress. Should that moment comes, I will go back to this post to remind myself that I am stronger, that no matter how hopeless the situation may be, there is ALWAYS a way out and it is up to me whether to take it or not.

So what is this negative aspect that I want to change” Not even sure if it would qualify as an “aspect” but if there is one thing that I really want to get out of my system or at least improve on is how I deal with stress. Alright, make that super stress. The small fry I can handle, as for the major ones…well, let’s just say I revel in them. And there’s the rub exactly.

First off, some context. I had been in a very stressful job for 5 years. And when I say stressful I mean endless overtimes, working on weekends and dealing with all kinds of shit all the time. I experienced working for 40+ hours with hardly any sleep and staying in the office for 4 days straight more than once. When beloved peace icon Cory Aquino took her last breath in the wee hours of the morning, I was in the office finishing a report. During her funeral procession that gathered thousands in the street for hours, I was also in the street, although mostly trying desperately to get home because I have a presentation the next day and it had been days since I last took a proper shower. I arrived home shortly before midnight. By 3AM, I was back at my desk in the office with my nose buried yet again at my tasks. This went on and on. Whenever people asked me to take a break, I told them I’m fine and really meant it. Sure, there are times when I complain but in overall, I was having a ball. There’s nothing like the thrill of accomplishment and the adrenalin brought about by crossing out yet another item in an infinite to-do list.

But then as years passed, my enthusiasm began to wane. Suddenly it was hard for me to say that I’m fine. I did not know if it’s just physical exhaustion finally catching up with me but I began questioning why I was subjecting myself to all of these hardships. Sometimes I would find myself just staring at my beloved computer and wishing I was somewhere else. I pined for the time when I still had a life outside of my cubicle. And so I found myself trapped in a deep dark hole. Waking up was extra hard and coming to the office was starting to lose its charm. I tried to shake it off by pushing myself even harder. But the harder I pushed, the tighter the darkness embraced me. I became a wreck. I drove people away. I got caught in one of the most tragic things that could ever happen to anyone: loathing what was once beloved.

That experience brings me now to this list – an enumeration of life’s lessons that I have learned the hard way. May you find comfort in it too.

HOW TO DEAL WITH STRESS WITH YOUR HEAD STILL INTACT:

1. Love what you do but don’t get into a relationship with it.

My tragedy was that I became too enamored with work to the point that it superseded every other aspect of my life. Working had literally become my life. All the rest had to be patterned against it. And considering all the bullshit I had to go through, I knew no other way of living but dealing with stress every single minute of the day. In time, I became comfortable it. That began my downfall. Pushing myself harder and harder became an addiction.

There were times when I could have gotten out of the office earlier, moments when I could have set out this task for another day but I chose not to. I wasn’t in a hurry to get home because I was already home. My cubicle became my sanctuary. In it I was invincible.

But my strong facade eventually crumbled. I thought of all the times I took a rain check instead of meeting with friends, of those moments with family in which I was only physically present because in my mind I was worrying about my deadline. I thought burying myself into even more work would shake off the negative feeling. But work was a demanding bitch who gave so little in return. I got lonelier. My keyboard never felt so cold.

So now, I pledge to continue giving my best in what I do but leaving room for me to pursue other interests. I will love my work still but I will love myself even more.

2.  Acknowledge that you have an issue. Just don’t dwell on it.

I was physically, emotionally and mentally exhausted but still sane enough to notice the signs. I was close to burning out. What aggravated the situation further was that I chose dug myself deeper into the dark hole.

Whenever a very stressful situation came up, I became even more negative. Indeed, why bother to search for the silver lining when the dark cloud was just looming in front of me?

There were times when I would be edgy and a war freak. Other times, I would be such a Debbie Downer. Whenever I was on this mode, I often found myself wanting to do something self-destructive. As if being a stress-a-holic wasn’t self-destructive enough. Either way, it was unhealthy and of no help at all. I turned people away and I ended up feeling more alone.

I’ve since learned that in times of negativity, the more I should crawl myself towards things that could make me happy or would make a positive difference not only to me but to others as well.   This leads me now to the next lesson..

3. Stop complaining. It’s self-indulgent and not to mention annoying.

In retrospect, I’ve come to a better understanding of the fine line between trying to come to terms with what one is going through and launching your very own pity party.

I realized that I could have saved myself a lot of time and frustration if only I skipped all the pseudo-rationalizing I did back then. Instead of finding ways to get myself out of the rut, I opted to hating myself and worrying about a ton of things that were not really crucial.

And then there were the negative posts on social media. I’d tweet about how messed up my life had become and how I’m barely hanging by a thread to my sanity. And when someone would inquire how I am faring and if I need a shoulder to lean on, I would just shoo them all away because fuck you world, I was an emotional wreck so I have all the right to be moody and unpredictable. Sometimes, I would just let it all out, even when the other person did not even ask for it. I literally shudder every time I remember how I poured all my frustrations to anyone who would listen back then.

But by being a gloomy ball of negativity, not only was I dragging myself further down, I was also lassoing all those around me into despair. I had no right to do that to them. Also, if only I channeled all that energy into getting the job done, I could have gotten myself more time for sleeping and other more enjoyable activities. Delving into the hole analogy further, contemplating on how dark the hole was won’t really get me out of it. I could curse at the darkness all I want but until I get the courage to light a candle, I won’t be going anywhere.

4. Just because you are not close to passing out doesn’t mean you are not giving your best.

I know that I am good at what I do. There was even a time when I was considered the very best. I just need to accept that I don’t have to kill myself in order to live up to expectations, even if they are my own. I am much better than that.

I’ve also learned to listen to my body more. There will always be a time when I need to go the extra mile but not to the extent that my health would suffer. I’ve known how it was to work despite being sick. So now whenever I have a junior that is not feeling well, I tell them to rest. And if they refuse, I flat out say to them that I have better use of them when they’re healthy.

And sleep is not just for the weak. It is also for those wise enough to know that resting would give them more time to do so much more while being in optimum condition.

5. Lastly, the best way to conquer stress is by helping others beat theirs

Or just by helping out others. Period.

I’ve done this a number of times and I always get the same results. Not only do I get the pleasure of being actually able to do good, I am also empowered to consider myself within the grand scheme of things. Even by just listening to the concerns of others, I’ve come to understand how petty my issues actually are. It’s also a good reminder that it’s not just all about me.

So those are my lessons learned. I would have closed this more dramatically but my body is telling me now that I should get to sleep. Therefore I end with this…